MPI-4: 25 Years of the Message Passing Interface and Heading for Exascale 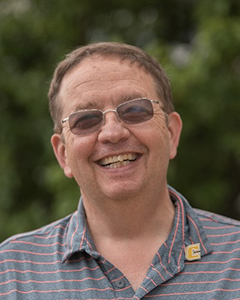 In this talk, I cover the history of performance-portable parallel processing based on the Message Passing Interface.

The following topics are highlights of the talk:

Anthony (Tony) Skjellum studied at Caltech (BS, MS, PhD). His PhD work emphasized portable, parallel software for large-scale dynamic simulation, with a specific emphasis on message-passing systems, parallel nonlinear and linear solvers, and massive parallelism. From 1990-93, he was a computer scientist at LLNL focusing on performance-portable message passing and portable parallel math libraries. From 1993-2003, he was on the faculty in Computer Science at Mississippi State University, where his group co-invented the MPICH implementation of the Message Passing Interface (MPI) together with colleagues at Argonne National Laboratory. From 2003-2013, he was professor and chair at the University of Alabama at Birmingham, Dept. of Computer and Information Sciences. In 2014, he joined Auburn University as Lead Cyber Scientist and led R&D in cyber and High-Performance Computing for over three years. In Summer 2017, he joined the University of Tennessee at Chattanooga as Professor of Computer Science, Chair of Excellence, and Director, SimCenter, where he continues work in HPC and Cybersecurity, with strong emphases on IoT and blockchain technologies. He is a senior member of ACM, IEEE, ASEE, and AIChE, and an Associate Member of the American Academy of Forensic Science (AAFS), Digital & Multimedia Sciences Division.